As a club we are sometimes fortunate enough to get players down who have played the game in other countries. Although we have many good athletes, few have given as much to the club as English native Nick Olive. When he arrived in Sydney he immediately came down and started coaching the Cubs, helping out the club before he had ever played a down. Although sometimes quiet, it’s a focussed intensity he brings to the field, with hard hitting and deft ball handling. One of the strongest players on the team through his dedication to the iron in the off season, Nick is one of those players that forces everyone else to step up a notch to try and match him. He is a force in the secondary, punishing ball carriers who underestimate his 5’4 frame, Nick was kind enough to answer some questions for us. 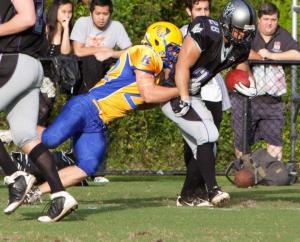 A sure tackler, Nick hunts down even the fastest ball carriers

While playing juniors, I played pretty much every position. From QB to DB to WR. I even had a stint at left tackle! Once I moved up to seniors I started focusing on DB and play Free Safety most of the time now.

I played cricket and soccer from a young age and in high school i got involved with the rugby 7’s team. Then along came gridiron and I dropped everything else.

I love how it is so different from any other sport. The chance to put your body on the line against an opposition and see who comes out on top is always good fun. It’s also great that no matter how big, small, fast or slow you are, there is a position for you.

Being switched on every single play. When you play DB, you only have to switch off for one second and you can give away a touchdown.

I would love to take it as far as I can. I played for Great Britain under 19’s which was great fun. Traveling around Europe playing international football, simply amazing. I have been given my first call up to the Australian National team so I am looking to do well for them and hope I can cement a spot in the team for years to come. I would love to win the premiership back in England one day as well. I got to the final last year with the London Warriors but we fell at the last hurdle. 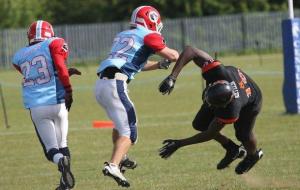 Nick is physical, laying the wood while playing for the Farnham Knights

Pasta, and lots of it!

So many great memories already. Winning 2 championships already has been pretty special, and so have the nights out to celebrate them.

It has to be the pirates. They are a big physical bunch and you know you’re always going to knock heads pretty hard.

Got to say UTS. They have been a pretty solid team, and it’s always nice to get the local bragging rights! 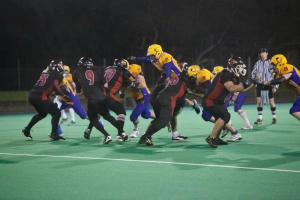